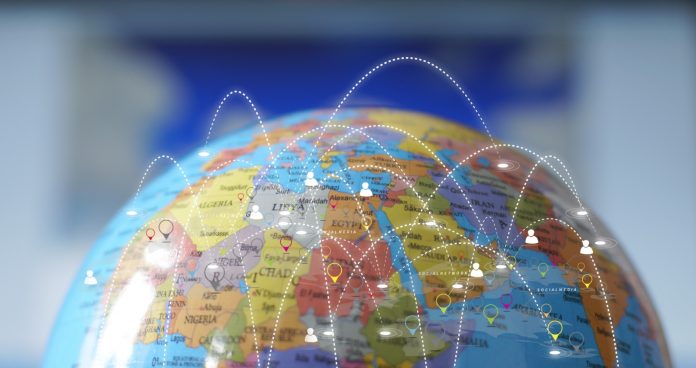 Globalization, the megatrend spawned by the physical connectivity of every corner of the world and solidified by digital connectivity, has once again come into sharp focus thanks to recent events such as Brexit, trade wars and the Trump administration’s effort to disrupt global supply chains controlled by China.

Yet, globalization is a force that’s much older than–and likely to outlive–the Trump administration.

Too often, people think of globalization–the process of continuing economic integration and the increased exchange of goods, services, ideas and people that accompanies it–as a fairly recent phenomenon.

We tend to associate globalization with the shipping container, a 1950s invention that dramatically increased the efficiency of global trade in goods; the rebirth of great trading economies like China and India as well as the outsourcing of jobs in advanced economies to economies with lower production costs.

The reality, however, is that globalization has been around since the dawn of time, helping spawn religions such as Christianity and Islam, which in turn have played an outsized role in shaping the world we live in even more than U.S. multinationals or China’s new corporate giants.

That said, globalization has only recently gained serious momentum and greatly changed economies over the past few decades fueled by fast-paced changes in technology as well as the increased mobility of goods, services, labor and capital.

This has spurred rapid economic growth in many regions, with world GDP expanding from around $50 trillion in 2000 to nearly $90 trillion USD in 2019.

Yet, globalization has also presented significant challenges, including an uneven distribution of its benefits and costs.

We are now entering a new era in which there are far more disruptive forces at work than was the case three or four decades ago. That means that increased tariffs alone might not be enough to stop the inexorable march of globalization.

Here are the top 5 globalization trends that are likely to dominate the 2020s.

#1 Globalization is not dying

Some experts have even been arguing that globalization might be on its deathbed due to a resurgence of nationalism, trade wars, increasing trade protectionism and immigration controls especially by the advanced economies like the U.S. and the EU.

In his book “The Levelling: What’s Next After Globalisation,” Mr O’Sullivan talks about a multipolar world forming that will be dominated by at least three centers of power: America, the European Union and a China-centric Asia. He also voices serious concerns about a global economy characterized by low growth and high debt and calls for a “world treaty on risk” whereby central banks will undertake drastic measures such as quantitative easing (QE) under pre-agreed conditions.

However, the COVID-19 pandemic has helped to dispel this notion.

The pandemic has been driving a major transformation in how we work. Unlike people, machines and robots do not get sick or spread viruses. The work-from-home phenomenon has increased remote work dramatically, with more than half of all workers, accounting for more than two-thirds of all U.S. economic activity, working from their home full-time at the height of lockdowns. With workers easily logging in from their homes, organizations will begin to ask why they need to be anywhere specific. This is likely to encourage the globalization of professional services and increased outsourcing of services that can be done to lower costs in other countries.

As individuals and companies continue to move online, national borders will continue becoming less relevant and stop being a major roadblock to cross-border trade.

Meanwhile, virtual meetings are substituting for travel and physical meetings thanks to videoconferencing technologies like Zoom, Skype and Microsoft Team with their greater efficiency enhancing even higher levels of engagement. Increased digital connectivity facilitates rapid flow of ideas, a critical dimension of globalization.

That said, unfavorable policies, tit-for-tat tariffs and trade wars by hostile governments definitely could slow down globalization in the coming years.

A defining feature of globalization and the global economy since the 1970s was a relentless increase in the volume of merchandise exchanged between nations, with an average growth rate of about 3.4% per annum during the 21st century.

Unfortunately, the trend slowed down dramatically over the past few years and eventually went into reverse in 2019 mainly due to trade protectionism.

This unfortunate trend is expected to continue over the coming years with trade tensions in the global goods market expected to persist. This could give rise to the so-called ‘slowbalization’ characterized by continued integration of the global economy via trade, financial and other channels but at a significantly slower pace. Large businesses with sophisticated supply chains could start experiencing big disruptions in the flow of goods which in  turn could slow down the economy even in the post-pandemic period.

Merely looking at how much stuff we ship around the world might not provide an accurate picture of the true extent of globalization.

Whereas the exchange of physical goods across borders might be slowing down, there’s an ongoing explosion of the digital economy. Increasingly, the digital realm is where the 21st-century economy lives with increasing trade in services such as music streaming and banking.

As the world’s economies continue to mature, we’re going to increasingly sell the rights to produce some goods to someone in another country rather than manufacturing it ourselves and shipping it to that country.

These changes will lead to less physical trade but an ever-increasing flow of data.

In less than a generation, emerging economies have gone from being producers of goods for developed countries to being the epicenters of world economic growth and  an important destination for consumer goods and services in their own right. Emerging and developing economies now account for 60% of global GDP, up from under a half a decade ago while they also contribute more than 80% of global economic growth.

This trend is expected to continue over the next three decades.

According to global consulting firm PwC, emerging markets will continue to be the growth engine of the global economy, with E7 economies increasing their share of world GDP from around 35% today to nearly 50% by 2050 led by China.

In a sense, the balance of economic power will gradually shift from the west to the east.

There is a serious ongoing debate whether China will ever become the global superpower it aspires to be. One one hand, the skeptics contend the gap between the U.S. and Chinese economy remains huge: Assuming no US growth over the next three decades, China would still have to grow its GDP at a 6% annual clip for its income per capita to catch up. Second, the U.S.’ military budget of $650B still dwarfs China’s at $250 billion (2018 figures).

Finally, China’s massive ageing population of 1.4 billion souls will demand a comprehensive social security system that will become a big drain on the economy, not to mention the costs of rectifying the environment after decades of abuse and neglect.

The shift of economic power, however, is likely to continue undeterred whether or not China eventually becomes a global superpower.

#5 Companies become more multinational than ever

Since the 2008 crisis, there has been a notable and worrying slowdown in long-term, cross-border investment aka foreign direct investment (FDI).This, too, has been provoking fears of a slowdown in globalization.

However, we also tend to ignore an equally important aspect of this equation: The share of revenue that companies are deriving from other countries outside their home market has been growing admirably. Interestingly, that metric has grown 9% during the current year, once proving again that Covid-19 has done little to slow down globalization.

China hawks in Washington may want to see a “decoupling” of Washington and Beijing; however, few in business see that as a realistic prospect. Indeed, the vast majority of American companies consider China a very important market and still want to do business there. As long as American multinational corporations such as the likes of Apple Inc. (NASDAQ:AAPL) and Tesla Inc. (NASDAQ:TSLA) continue viewing China as a pivotal market, chances of any real decoupling may only be academic.

You can expect supply chains to continuously adapt to the new reality of increasing tariffs amid escalating geopolitical rivalry between the U.S. and China with nations set to become even more interdependent.