Home Markets The Meatless Meat Boom is Just Getting Started 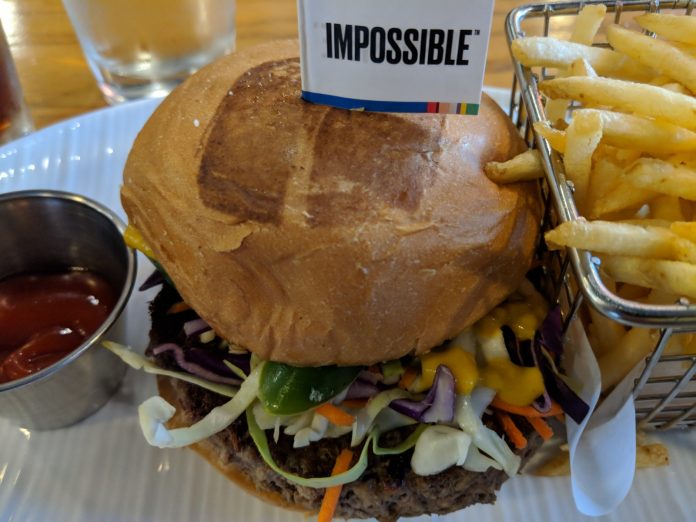 There is a meatless war brewing, and the leading protagonists are slugging it out in a bid to be crowned champion of the  alternative meats industry. In one corner is Wall Street darling, Beyond Meat Inc. (NASDAQ:BYND), the certified vegan brand that has been serving up meat-like adaptations of burger patties and sausages. In the opposite corner is a fierce competitor, California-based Impossible Foods, a private player famed for the impossible burger and impossible pork.

But this playing field is about to become more crowded as plant-based food 2.0 throws up new players who will have learned from the mistakes of the pioneers.

Still, last year was an epic one for the fake meat industry: In the space of just 12 months, vegan meats went from something very few Americans had even heard of to something that 40% had actually given a try.

It all started in the spring of 2019 after Impossible Foods struck strategic partnerships with Qdoba, Burger King and dozens of other restaurants and franchises.

Although at first both companies entered the mainstream fast-food market by selling burgers, they have since launched more novel products such as Beyond’s ground beef and KFC chicken to Impossible’s sausages.

The Trends Behind the Trend

Meat is a huge business in the United States.

According to the National Chicken Council, in 2018, Americans consumed 110 pounds of beef and pork; 94 pounds of poultry and another 16 pounds of commercial fish and shell-fish per capita for a combined 220 pounds of meat–more than 50 pounds higher than what they consumed in 1960.

That’s a colossal amount of meat, placing America second behind only Australia on the list of the world’s biggest per capita meat consumers.

This love affair with meat has helped build a $1.4-trillion industry, and meat alternatives are now coming in to stake their claim in this mammoth market.

How big could this budding sector grow?

Currently, the U.S. plant-based food market is valued at $5B with the plant-based meat sector approaching $1B. However, the sector has the potential to grow much bigger if the growth trajectory of plant-based dairy foods is any indication.

Plant-based dairy foods have managed to garner some 14% of the dairy market, with plant-based food retail sales now growing 5x faster than total food sales. If vegan meat is able to replicate this feat, it could balloon to a $200B industry in the near future.

Indeed, sales of plant-based meat surged 280% at the height of Covid-19 thanks to widespread meat shortages and rampant closure of slaughterhouses around the world.

Further, people are becoming increasingly wary of ‘animal-borne illnesses’ with the origin of the novel virus pinned on bats which spread it to humans in one of the deadliest cases of zoonotic spillover.

Here are the top trends that could power a vegan meat boom over the next decade.

Over the past decade, global consumers have increasingly been opting for health foods with the global health and wellness food market poised to expand by $236B during 2020-2024 period, good for a CAGR of 6%.

Some vegan meat skeptics have pointed out that many of these meat alternatives are highly processed and do not deserve the “health halo effect” they tend to receive simply on account of being vegan. Some studies have concluded that some vegan meats have calorie, fat and sodium content comparable to or even higher than beef. Still, the health evidence seems to tilt more in favor of vegan meats than animal meat. According to a large-scale 2016 Harvard study, processed red meat has been linked to significantly higher death rates than plant protein. The Harvard researchers found that plant proteins appear to be most protective from deaths linked to heart disease, especially among people with unhealthy benefits including smoking, heavy alcohol intake, overweight/obesity, and physical inactivity.

A total of 131,000 participants took part in the Harvard study which tracked them over 32 years.

More and more people though are opting for vegan meat due to another big reason: They are healthier for the environment.

Beyond Meat says it takes about 41 square feet of land and 58 gallons of water to produce one 0.25-pound beef burger, not to mention that our 1.4 billion head of cattle are responsible for 40% of our annual methane budget–a gas that’s 80X more potent than CO2 at trapping the sun’s heat.

A recent Bank of America Merrill Lynch survey revealed that 35% of respondents said they opted for plant-based protein due to health or nutrition reasons while 30% did the same for environmental reasons.

Yet another reason why more people are choosing plant-based meats: Fake meats are getting ever closer to the real thing.

That’s a critical milestone because experts agree that taste will be the big make-or-break factor for the vegan meat industry. The Beyond Burger and Impossible Burger have received positive reviews at Food & Wine while traditional veggie burgers have scored much lower.

The most bullish finding: More than half of respondents, both young and older folks, who have tried plant-based meats say they are likely to come back for more.

Fake meat stocks have lately gone parabolic, with Beyond Meat leading the arena with a 145% gain in the year-to-date and 640% since its May 2019 IPO thanks to continuing robust topline growth.

Bullish Wall Street analysts have pointed to the rapid growth of the total addressable market of alternative meats. Barclays analyst Benjamin Theurer has estimated that Beyond could capture about 4.5% of global market share of alternative meat over the next decade, which would imply a 3,000% revenue jump.

As we have pointed above, the alternative meat industry could balloon to a $200B industry if vegan meats are able to grow as fast as their plant-based dairy sector brethren.

Although China is home to 18.5% of the world’s population, the country consumes 27% of the world-wide meat production. China’s love-affair with meat has led some analysts to believe that it could become an important market for vegan meat companies once the Chinese become more aware of the health and environmental impact of meat products.

Impossible Foods and Beyond Meat have already shown strong intentions to capitalize on this market with Beyond Meat previously announcing plans to commence vegan meat production in China by 2020-end. Impossible Foods’s sausages could also find a ready market there considering that China currently consumes the largest amount of pork of any country in the world.

The meatless meat boom has helped vegan meat stocks go ballistic, leading to a cross-section of Wall Street warning that some have turned into cult stocks whose share runs have outpaced their fundamentals.

Beyond Meat is frequently in the news due to its huge runup since its IPO. Lately, BYND has been slipping after Bernstein lowered the producer to an Underperform rating after having previously slotted it at Market Perform. The analyst’s $136 price target represents 26% downside to current price.

Despite valuation concerns, the long-term outlook for the industry appears bright with the long growth runways allowing many players time to grow into their steep valuations.

The top picks in this sector include: