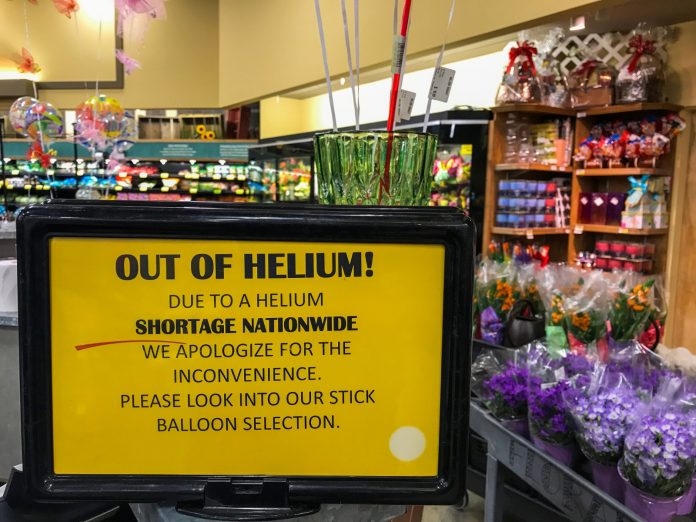 As the second most abundant element in the Universe behind only hydrogen, it’s ironic–and somewhat maddening–that helium is also one of the rarest elements on earth. In our atmosphere, helium occupies just 5.2 parts per million (ppm), earning the designation of a ‘rare’ gas thanks to one of its most treasured qualities–being much lighter than air.

Helium is an inert gas that’s so rare on our planet, partly due to the fact that it’s 7x lighter than air and can, therefore, readily leak into space and eventually get torn away by solar winds but also because not much is generated by earth’s natural processes.

The helium that we find on earth is a product of radioactive decay from minerals made of uranium and thorium. These emit alpha particles composed of two protons and two neutrons, which then attract electrons turning into them into helium atoms. Each year, our planet produces about 3,000 tons of helium through radioactive decay deep in the bowels of the earth.

Unfortunately, the vast majority leaks off into space, and whatever little that is trapped comes nowhere close to meeting our global demand of 32,000 tons of helium per year (about 6.2 billion cubic feet measured at 70°F and under earth’s normal atmosphere). The vast majority of our helium reserves come from millions of years of gradual accumulation especially in shale formations.

Helium is, therefore, regarded as a finite, non-renewable resource.

This presents a big conundrum as we try to feed our growing helium habit.

Helium’s unique properties make it an essential component in cryogenic shielding, leak detection, heat transfer, and analytical and lifting applications. At a melting point of -261.1°C (-429°F), helium has the lowest melting point of any element, meaning there’s no substitute for the gas where ultra-low temperatures are required. This makes helium indispensable in the field of superconductors. Helium is also a critical component in the manufacturing process, such as MRIs and semiconductor chip manufacturing.

Explosive growth in the semiconductor and healthcare industries as well as space and quantum computing have been driving global demand in helium.

A good 10% of our annual supply goes into party balloons, and the global shortage eased due to widespread lockdown and social distancing measures–but only temporarily.

With demand constantly outstripping supply, helium prices have predictably skyrocketed, hitting $35 per liter in 2019, more than double an average of $14.60 per liter they commanded three years ago.

With the helium supply crunch not about to go anywhere any time soon, helium bulls clearly have the upperhand here.

Only a small percentage of the helium generated through natural means is readily accessible, and even a smaller proportion is economically feasible to collect.

After being formed deep in the bowels of the earth, helium tends to rise and collect in the same deposits as natural gas. In fact, most of our helium supply comes from natural gas companies which collect the gas as ancillary benefit. Unfortunately, current technological limits mean that helium is only economically recoverable at concentrations greater than 0.3%. Consequently, the vast majority of the helium in gas reserves is simply vented away.

No more helium from the Fed

But the biggest chink in the helium supply chain is the fact that a large chunk of the supply is in the hands of the U.S. federal government.

Back in 1925 when helium-based airships seemed like they would become vital to national defense, the U.S. government created the Federal Helium Reserve (FHR) out of a giant, abandoned salt mine located 12 miles northwest of Amarillo, Texas. Over several decades, FHR collected as much helium as it could and essentially became the world’s strategic helium reserve supplying ~40% of the world’s needs.

Unfortunately, the FHR eventually ran into debt trouble to the tune of billions of dollars thanks to its habit of selling helium at well below market prices. In 1996, the U.S. government passed laws mandating FHR to sell off its reserves and close in 2021 in an effort to recoup its debts.

The Bureau of Land Management (BLM) has outlined the process and timeline by which the FHR will dispose of its remaining helium and helium assets.  BLM, which now manages the reserve, managed to sell off most of the stored helium to all users, with the remaining 3 billion cubic feet (84 million cubic meters) by 2018 restricted for sale to only federal users, including universities that use helium for federally sponsored research. BLM held its last Crude Helium Auction in Amarillo, Texas, in 2019 with the price rising 135%, from $119/Mcf in 2018 to $280/Mcf in 2019.

The sale of crude helium to private industry has been discontinued and the remaining stockpile is earmarked for Federal users only.

The sale deadline has since then been extended to 30 September 2022, but  privatization likely won’t be completed until at least 2023.

There are a ton of stocks to play in this space, including giant Exxon (NYSE:XOM), which produces about 25% of the world’s helium supply at its plant in LaBarge, Wyoming. Regeneron(NASDAQ:REGN) is also poised to become a major helium player, with South Africa’s first-ever liquid helium processing technology.

On the Toronto Stock Exchange, smaller players such as Royal Helium Ltd. (RHC:TSX.V) and Desert Mountain Energy Corp. (TSX-V: DME, OTCQX: DMEHF) are positioning themselves in this burgeoning market, as well.

RHC, a small-cap helium pure play, has strategically positioned itself to take advantage of Saskatchewan’s thick shale cap that traps the helium gas beneath it. Desert Mountain, a Vancouver-based resource company actively engaged in the exploration and development of Helium and Oil & Gas properties in the U.S. Southwest, has been exploring for helium in the prolific Holbrook Basin project in eastern Arizona, the so-called “the Saudi Arabia of helium’’ and one of the world’s richest helium fields. The company announced the discovery of high-grade helium deposits in its new exploratory wells in Arizona in September last year.